Parishioners, family and friends are welcome to come and see the film, ‘A Star is Born’.

This film was made in 2018 and is a remake of a classic film first made is 1937. Remakes were made in 1955 starring Judy Garland, and 1976 starring Barbra Streisand. This new version stars Lady Gaga as you have never seen her before (without wig, outlandish costumes and garish makeup) and her performance as an actress and singer won international acclaim.

The film received multiple Golden Globe and Academy Awards for both acting and film presentation and has a M classification. A flyer is on the Church noticeboard.

Come along and enjoy some good company and an enjoyable film at Trinity-at-Waiake on Friday 28 February at 7.00pm.

Tea and coffee will be served at supper. A gold coin donation would be appreciated to offset costs. 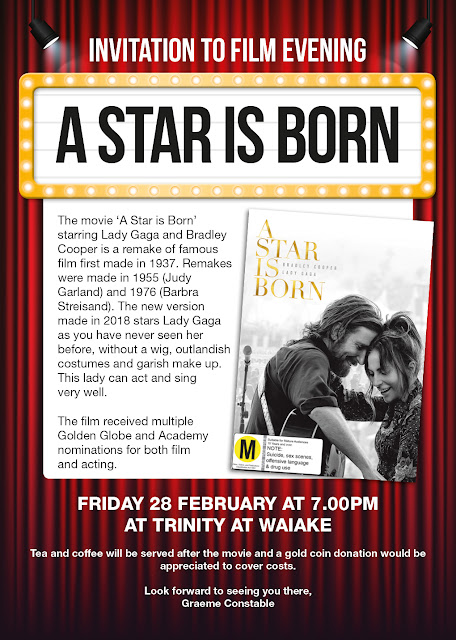 Posted by ecbmethodist at 12:55 pm